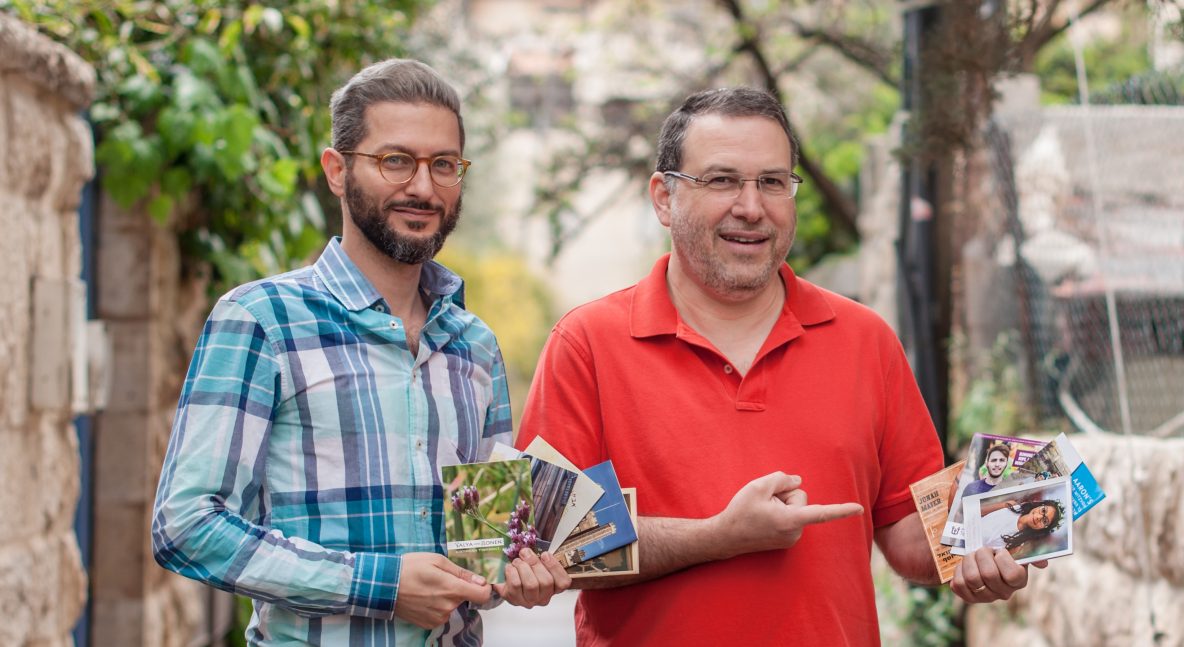 Reciting birkat hamazon (the grace after meals, or benching, in the colloquial English expression of the Yiddish term) is the traditional time when Jews come together after a meal to give thanks to God. People often collect benchers from weddings and bar and bat mitzvas, which are made available at the end of the meal for all guests to enjoy.

Daniel Laufer and Yitz Woolf, founders of Let’s Bench, want to take benchers to the next level.

“The inspiration for Let’s Bench happened a few years ago,” Laufer recalls.

“I had been working for more than 20 years in Jewish education in a program for high-school kids through Ramah. At the end of the program I wanted to give them a gift that had Jewish value and reflected their experience in Israel. I put pictures in a bencher. It came out really well; the kids and parents loved it, and everybody thought it was a great idea.

“It evolved from there. Yitz and I saw that it was something that could really make people happy at their weddings and other events. We created a user-friendly online app.”

The Let’s Bench website is similar to online self-publishing photo albums like Snapfish, but its more streamlined approach makes it possible for anyone to go online and create the bencher that they want for their event. Users choose their nusach (Sephardi, Ashkenazi or Chabad) background color and content, get a template and customize. They can upload and position their photographs in a simple manner, insert logos, drawings, designs and more.

Woolf and Laufer emphasize that anything that can be uploaded as a jpeg file can be used.

“The idea was to create something not overwhelming, easy to approach,” Laufer says.

“The idea is to make it a relatively quick and pleasurable experience. In addition to booklets, we offer folding laminated cards. There are different price points, with the booklet being the more premium product.”

The Let’s Bench website includes a library of photos taken by Woolf, an accomplished photographer, enabling users to include Israel and family photos. Laufer and Woolf relate that the parents of an aspiring photographer who was becoming bar mitzva made his benchers into his first portfolio. Similarly, the benchers can serve as a kind of calling card for an organization, with pictures of their community and their story. People then take it home with them and use it again and again, unlike a typical business card. Laufer and Woolf’s most recent order was from the Shalva organization, that wanted benchers for its celebratory Shabbat after the disabled Jerusalem marathon.

“We’re creating a moment,” Woolf adds. “It’s your bencher with your story. We have a drawer full of benchers at my sister’s house, yet people always grab the ones with photos. They’re beautiful, modern, clean – wonderful to look at. People want to have them as a keepsake that conveys something. Whether a wedding anniversary or a corporate event, it tells the story in a unique way.

Moreover, if someone’s grandmother can’t make it to the event in Israel, you can send her one of these. It’s like a PowerPoint presentation and party favor combined, reflecting the unique perspective of the family or whoever is putting on the event.”

Laufer and Woolf upgrade the Let’s Bench application constantly. They are focusing now on building up the business; learning about search engine optimization (SEO) and marketing on social media.

“We’re a bencher company and now we’re learning all the aspects of a startup,” Woolf states.

The focus on treating Let’s Bench more like a start-up arose when Laufer and Woolf relaunched the company in December. It had been in existence for a number of years before that as a side project, but marketing was solely word of mouth. They affectionately refer to themselves as bencher capitalists.

“I left my career as a Jewish educator to enter the entrepreneurial world and try to make Let’s Bench a success,” Laufer says.

“Working with people and managing an organization has its own excitement; there’s a certain challenge in taking an idea and making it into a successful business. We get such amazing feedback, so I’m really optimistic about the future. Now we’re really marketing it to get Let’s Bench out there. We’ve made hundreds of benchers so far and I think it will continue to grow.”

One of the strengths of the benchers is their incredible versatility, appealing to Orthodox, Conservative and Reform alike. They make benching more enjoyable for children, who love looking at the pictures.

“In this day and age, where looking at photography is so much a part of social media, this is a throwback and something modern,” Laufer notes.

“Birkat hamazon is more than a religious custom. It’s a moment where people gather together and sing. It’s done all over the world at all kinds of Jewish events.

“Our product gets used and reused regularly, creating an opportunity for people to recall and reminisce. It makes people feel good. One family told us that when they broke out the benchers at their simha, people looked at them and there was this moment of awe. It was special and moving.

“That’s what we’re trying to sell; the opportunity for you to give something out that really tells your story.”

We use cookies to ensure that we give you the best experience on our website. If you continue to use this site we will assume that you are happy with it.OkNoPrivacy policy